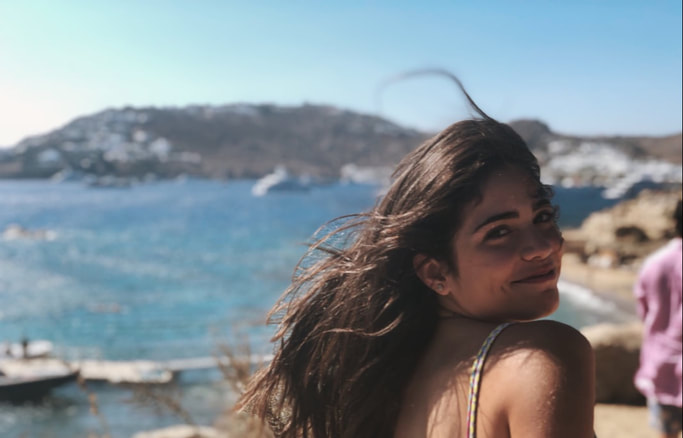 By: Linda Rodriguez Bernfeld | March 7, 2018 |Click here to view article
Helping victims of human trafficking is Alexis Almeida’s mission in life. Her work in that area is one of the reasons she is the Gulliver Prep Silver Knight nominee in the area of Social Science.

In October 2016, she started a program called Unbound Miami.

“Unbound Miami has a three-part mission,” she says. “Creating opportunities for advancement for formerly trafficked people, raising their self-confidence through tattoo removal, and increasing public knowledge of human trafficking and modern slavery in the community.”

Almeida works with Teens for Teens, made up of student representatives at a number of high schools. Their goal is to raise awareness about human trafficking. The teens also run drives to collect donations to help the victims.

She created Unbound Miami at a time when she was personally struggling and needed to put her energy into helping others.

“I founded Unbound Miami in the hopes of freeing survivors of human trafficking from the agonizing memories attached to the tattoos (branding) that were placed on them by their traffickers,” she says. “As I began to learn more about the severity of their situations, I quickly realized that their basic needs were not being met. I decided to collect donations such as clothing or toiletries to begin meeting these needs.”

The more she became informed, she realized that teens are especially vulnerable to this modern-day slavery.

“I simply cannot imagine how I would feel if two years from now, I received news of a Gulliver student being manipulated into sexual trafficking, knowing that I might have been able to prevent it,” she says.

That led her to recruit the teens at the other high schools.

“I began the Teens for Teens campaign to raise awareness about this epidemic,” she says. “My goal is to encourage students to realize their social responsibility for each other, to recognize the signs of human trafficking, and to be able to help their peers avoid falling into a trafficker’s trap; essentially, promoting a proactive versus reactive society.”

When she started Unbound Miami she was talking to one of her teachers who connected her to the founder of Miami Tattoo Co., who removes tattoo brands from victims. Almeida is now connected to the Miami-Dade Coordinated Victims Assistance Center (CVAC). If a branded victim goes to the center, the folks at the center refer the woman to Unbound Miami.

While her activities have been successful, Almeida is looking for additional help. She’s hoping to find an adult who can help the organization with organizing a fundraiser. She’s also coping out potential leaders for Unbound – someone she can train to take over when she goes to Duke University next year.

She plans to start an anti-human trafficking organization at Duke when she arrives in North Carolina.
Locally, Almeida gives occasional presentations on the problem of human trafficking.

“I have spoken at an event at CVAC and a human trafficking panel at Calvary Ministry,” she says. “I have also given presentations in some of the classes at school.”

Although Unbound keeps her busy, she’s still involved in other organizations at Gulliver. She’s a member of Key Club, the French Club/French Honor Society and she’s the secretary of the National Honor Society.

Through Unbound, she also volunteers with Kristi House’s Project GOLD. As for the future, after college, she’s still undecided.

“I wish I knew exactly what I wanted to do but my goal is, of course, to do something I love which would undoubtedly include having a positive impact on others and possibly from a more global perspective.”
​
Linda Rodriguez Bernfeld